Hamble Marine Surveys are trained in Diesel contamination testing and identification of the 'Diesel Bug'. We offer an on-site service that takes no more than 1 hour. We test your diesel and are able to report on Fungi and Bacteria content and whether further treatment is necessary. With the increased use of biofuels and reduced sulphur content in modern diesel, the presence of Bacteria and Fungi in diesel can result in blockages in your engine filter system and untimately engine failure.

Over 70% of RNLI call-outs are as a result of engine failure or problems. A significant proportion of the engine failures may be due to diesel contamination and bacteria growth. 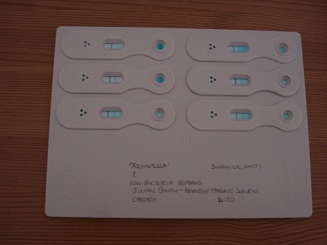 The presence of water in diesel fuel creates the ideal condition for bacteria and fungi growth. The 'sludge' resulting from the growth presents itself in the transition between the diesel and water in a tank. It also becomes attached to the tank sides and hosing. If after testing it is found that bacteri and fungi growth are present in a concentration such that this may cause problems, the use of a broad spectrum biocide is recommended. Testing and treatment is this manner can save you money as draining and tank cleaning is expensive (£400-600) not to mention the safety implication should you have an engine failure.

The image shows the test panel used when assessing Bacteri and Fungi content. The test is clean, quick and requires access only to your fuel tank(s).

A written report is issues and if necessary further advice is given if a biocide is required for treatment.

Contact Julian Smith for more information or to arrange testing of your diesel.