When insect or rodent infestation is discovered on a vessel irrespective of the vessel’s size this can present a significant health and potential maintenance nightmare. While no reliable statistics exist, a large percentage of pleasure craft have some form of infestation whether small insects including common household spiders or flies, but in some cases this can include cockroaches, beetles or even rats.

Recently a serious case of beetle infestation was recorded and documented on a 70ft steel vessel operated in the Mediterranean. The vessel when purchased had no evidence of significant infestation save for a small number of cockroaches which were successfully treated. Later a fine wood dust was noted on the saloon sole and on cabin berths and cupboards backs. The fine wood dust was almost ‘talc’ like and noted in conical piles suggesting it had fallen from the headlining.

A closer inspection of the joinery behind the head linings and support joinery under the sole suggested a woodworm like infestation was present and shortly after this small red brown insects were noted dead and some still alive in the bilges.

The joinery affected by the wood boring insects were closer examined and noted externally to be sound save for small holes. When cut or snapped the joinery’s interior was honeycombed in appearance with significant loss in strength. In the most affected areas the joinery was condemned. 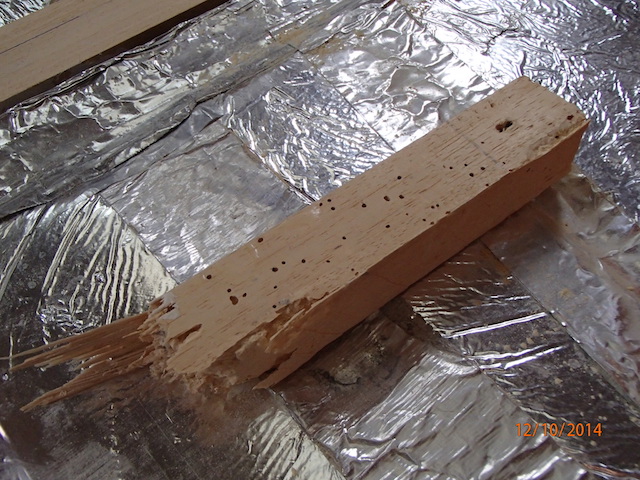 The insects in the bilges were examined by experts and identified as Powder Post Beetles (lyctus Brunneus).

They are very small beetles, reddish brown to black between 2 and 5 mm in length. 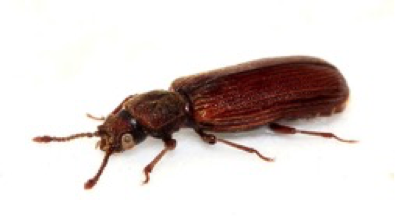 Its life cycle usually last a year but may be accelerated by wet conditions and a warm temperatures. In environments with heat and humidity the life cycle time can be greatly reduced.

They are unable to digest cellulose so they attack wood with high starch contents (over 3%) and moisture content of at least 6%.

They are usually found in the sapwood of broad-leaved woods such as oak, walnut, ash, elm, cedar, eucalyptus and occasionally cane furniture and bamboo.

The life cycle begins with the beetles laying eggs in the pores of the wood surface, choosing the wood species above because of their wide pores capable of accepting their eggs that are large and cylindrical.

Hatched larvae are white but with their head and jaws dark in color, 3 pairs of very small feet and quickly begin to gnaw wood. They are approximately 3 mm long.

Shortly before the pupal stage they become located near the surface of wood and then pupate. The adult then makes an exit hole of 0.8-1.8 mm depending on species.

Adults are very active at night, fly readily and are attracted to light. It is clear to see that in an enclosed vessel’s cabin this can result in the lifecycle easily beginning again and again.

The treatment for this beetle comes in various forms whether gassing, painted liquid/gels on to directly affected joinery, or removal and replacement of affected joinery. By the nature of yacht or powerboat construction, removal of all affected joinery can be difficult and very expensive. Each case has to be dealt with taking all factors into consideration. It should be noted that the damage to the affected joinery is caused by the larval stage of the beetle and not the adult. To this end simply gassing the visible adults will not resolve the issue.

How to prevent beetle infestation is very difficult to answer simply. Some vessels are built with infected wood and so can be ‘inherited’, and will need a more reactive treatment. Other cases require close monitoring and early treatment, very close attention to joinery being used during repairs and re-fits and care taken when introducing furniture onto a vessel.

As with all infestation especially on larger vessel’s and those in commercial charter, close monitoring is the key along with managment of introduced contaminated passenger’s belonging and packaging all present a real challenge for the operators and owners of such vessels.

If you suspect that you vessle may have infestation contact a reputable company for advice prior to attempting to self-treat.